Christian Peitz-Austermann, from Sassenberg near Münster in Westphalia and Klaus Möhwald, from Waldsassen / Selb in Bavaria, basically live at opposite ends of Germany, yet the two of them share a common passion for historical motorcycles, bicycles and cars.
They show their love of “old wheels” by collecting, assembling, restoring and repairing old bikes and cars. Christian and Klaus also value sharing their experience, interests, tips and insider knowledge as well as building and maintaining networks with others who have similar interests. Their connections and contacts have already developed into a worldwide network focusing on historical motorcycles, bicycles and cars.

Klaus Möhwald, has always had a passion for motorcycle sports, starting at a very young age. During his apprenticeship as a car mechanic at a construction company in Waldsassen, he gained knowledge and skills, which he is still benefitting from in terms of restoration and repair of all types of vehicles.  Ever since then, Klaus needs to breathe the air of garages and workshops to live his ideas and “special projects”. He put every minute of his free time and invested every cent of his allowance into his first “hand-made” bikes.

After his mandatory draft into the military where he served as an athlete in Sonthofen, he went back to school and studied mechanical engineering in Munich. That’s when he became the “ultimate vehicle guy” as he likes to describe himself. Driven by power, curiosity and great passion, bicycle and motor sports become his life.

In the 90s, Klaus competed at many international races and started to develop his own bikes, manufactured by his own company.  A new brand was born – GHOST. What Klaus started in a garage developed into an extremely popular brand and company with 293 employees in 2012. GHOST bikes have won an Olympic Gold medal, World and European Championships and many design awards. GHOST’s professional teams are among the most successful in the bicycle scene.

Christian Peitz-Austermann, owner and manager of the mobile home and camping park Heidewald in Sassenberg, took a different route before his passion for motors took over. When he was young, his Grandma gave him a present – a 1954 Herkules moped with v-belt drive – sparking his enthusiasm for old motor technologies. After his apprenticeship, it was inevitable that his interest grew stronger: With a shiny new driver’s license, but hardly any money in his pocket, Christian had to come up with a plan. Car trouble was a common problem back in those days, and his friends relied on Christian to help them out. That’s when he happened to meet the 70-year-old owner of a body shop. Christian was fascinated by the way this experienced “tinkerer” took care of old engines of all sorts, breathing – and building - new life into them. From that moment on, he spent every free minute with the old man and learned invaluable lessons. In his role as adopted Grandpa, the old man taught Christian old car and motorcycle technologies and shared specialized knowledge about a variety of models, dating as far back as the pre-war era. That’s how Christian found his passion! 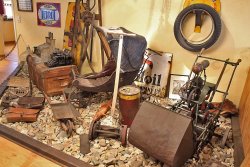 Even after Christian took over the mobile home and camping park Heidewald, old motorcycles and bicycles remained his real passion. On site, he built his private motorcycle museum housing many historical pieces, which he bought at exhibitions and other events. Last year, the museum had to make way for new construction within the mobile home park. But a new museum is being built, opening shortly - one that is bigger, more convenient and more professional than the first one. Engine enthusiasts will be able to marvel at the most interesting exhibits, touch them and talk shop with Christian. 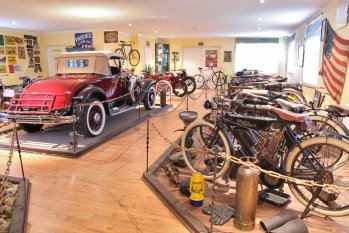 Old-Wheels
More than five years ago, Klaus Möhwald went on vacation and happened to stay at the very campsite owned by Christian Peitz-Austermann. Fascinated by the exhibits at the motorcycle museum, the two men started sharing their stories and enjoyed intense shop talk. Their budding friendship lasted much longer than the vacation. Through their common interest in collecting, Christian and Klaus get to know each other better and better. They met at trade fair shows, exhibitions and other special sports events fueling their passion for old motorcycles. Over the course of the last four years, the profound specialized knowledge gained on their different paths yielded a wide variety of motorcycles, bicycles and cars. Built on their passion, common interest and friendship, they developed their online platform “old-wheels”.

Their fascination and “old-wheels” related activities expanded into a worldwide network of vintage passion. They have contacts all around the globe – all living their passion for vintage motorcycles. Christian and Klaus have become sought-after specialists in historical bicycle and motorcycle motor sports. While Christian specializes on US bikes and pre-war motorcycles, Klaus’ expertise focuses on post-war motorcycles. He has great insider connections thanks to his own Enduro/MX motorsports activities and interest in historical road racing sports.